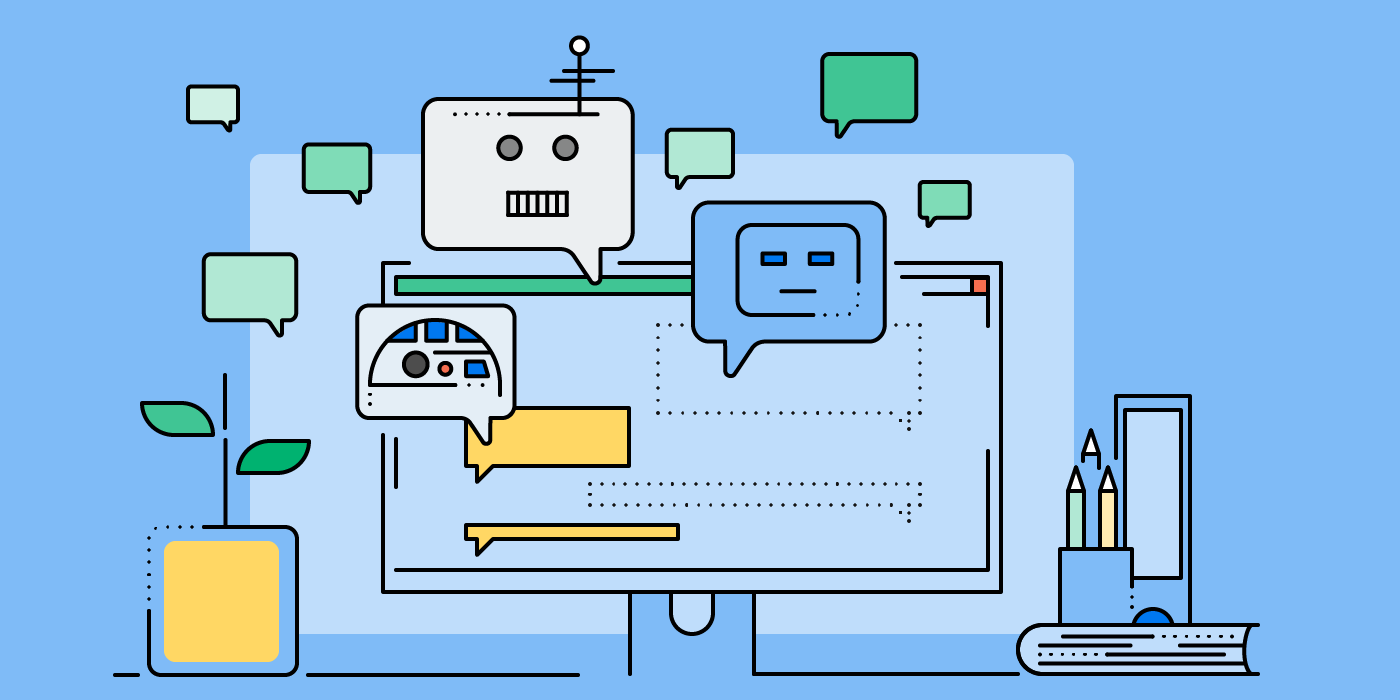 Social Bots – How They Work, How They Help, and How They Can Be Trouble

Today we hardly can imagine a world without social media. Thanks to Facebook, Twitter, Instagram & Co. we can communicate with friends and peers and connect with people anywhere and anytime. However, there is not always a human being behind each account. More and more frequently, you are actually connecting with a software called social bot.

According to the social networks themselves, approximately 9-15% of accounts on Facebook and Twitter are fake. Statistics indicate that there were about 300,000 chatbots on Facebook in 2018. By December 2020, 80% of companies plan to use chatbots. This will come as no surprise when you consider that 3 out of 5 millennials are using chatbots according to their own account. At the same time, the B2B sector is lagging far behind. Less than 1% of companies use chatbots in the B2B environment.

Often, social bots are found guilty of spreading fake news and hate speech. Especially due to their activity during the controversial political discussions on US elections, Brexit, Ukraine conflict, the coronavirus and refugee crisis, social bots were strongly suspected of manipulating public opinion. In German media they actually have been discussed as a threat to democracy. Finally, the European Commission is also concerned with combating online disinformation. The Commission has asked the providers of three major platforms to report monthly on the measures they have taken to tackle the malicious use of bots.

The exposure of citizens to large-scale disinformation, including misleading or totally false information, is a major challenge for Europe. The Commission is working to implement a clear, comprehensive and wide-ranging package of measures to combat the spread and impact of online disinformation in Europe and to ensure the protection of European values and democratic systems.

In this blog post we explain what social bots are, how they work, and how you can program such a bot yourself. In part two of our article you will learn how bots influence our society and politics, whether there actually is a need for action from politics, and how bots can be unmasked.

What Is a Bot? And More Specifically, What Is a Social Bot?

Unlike its name suggests, a bot is not a robot in the original sense, but merely a simple software which autonomously processes repetitive tasks. For example, there are web crawlers used by search engines, which independently inspect websites, analyze their content and thus enable the search by keywords in the first place. There are also spam bots which can be programmed to collect email addresses in order to send unwanted spam mails. And there are chatbots, software to which you can speak or write – (almost) like to a human.

Chatbots are more and more complex algorithms based on rules or machine learning. Therefore, they can be considered intelligent. They serve for entertainment or a specific purpose, such as online search, news feed, or online shopping and customer service. While the term chatbot mainly refers to text-based communication assistants that handle basic question-and-answer conversations, more and more intelligent virtual assistants are being used in everyday life. Cortana from Microsoft, Siri from Apple, or Alexa from Amazon not only take on specific tasks but also provide support for as many different services as possible.

Chatbots are being used more and more in messaging apps. Some enthusiasts actually predict that social bots might eventually replace websites and apps in the future. Bots allow companies to better reach their target audience through various APIs. The news site Business Insider estimates that the introduction of chatbots could save the healthcare, banking, and retail sectors $11 billion a year by 2023. Depending on the industry, companies are already seeing the great potential and have made the use of bots an integral part of their corporate strategy. BMW, for example, offers a WhatsApp bot that allows customers to check the status of their car repairs, and HP helps to set up one’s printer with its Facebook bot HP Print.

How Bots Can be Used in a Positive Manner

Bots may be used for a good reason, for entertainment or for completing repetitive tasks. Because it is possible to reach many people in a short time through social networks, there are also numerous bots on Twitter, sharing the current weather, news or content updates to your website. (At Boxcryptor, we could program a bot that automatically tweets about what’s new here on our blog.) Other helpful Twitter bots warn against earthquakes in earthquake-prone areas. Furthermore, the BBC News Labs developed Twitter bots specifically for the EU referendum and the US elections, which reported real-time on the voting results by creating and posting graphics.

For another example of the positive use of a bot, have a look at the tweets of @dscovr_epic. These are impressive pictures of earth taken in space by the DSCOVR satellite of the NASA, tweeted complete with location and time taken.

A social bot accordingly is a bot which lives in social media, such as Facebook or Twitter. Often the software pretends to be a common human user with a realistic-looking account including profile picture, posts and friends or followers. Social bots are programmed to autonomously create posts or tweets. If they are able to simulate human behavior well or rather poorly depends on their “intelligence”. The basic version responds to keywords or hashtags and independently posts content written beforehand only adding trending hashtags. It is also possible that the bot on its own makes friends with other accounts or follows them. The more complex version is able to analyze content in social media or on specific websites and generate elaborate new texts, or even have conversations almost like a human. Some bots also fake a sleep-wake cycle. Social bots are made more “intelligent” the better the algorithms of WhatsApp, Twitter & Co. are getting at spotting them.

It is essential to always bear in mind: social bots stand together. An army of social bots is well able to make a difference, influence political discussions in social media and actually pose a threat to democracy.

How to Make a Social Bot

A basic social bot is easy to build. There are various tutorials and even code for free use on the internet. You only need advanced programming skills, when it comes to more complex algorithms and machine learning. In fact, you can save yourself the effort of programming, but instead just buy the ready-made software online, depending on the use case of your social bot.

The construction plan of a social bot combines three elements:

You can purchase Twitter accounts online in bulks, for example, 10,000 accounts for $100. The accounts are created manually or automatically, or they could be hacked accounts. If you choose to spend $500, you can just buy the software to auto-control the accounts. Such an army of 10,000 Twitter bots which work together by referring to each other’s hashtags, could effectively manipulate which topics are trending and thus the public opinion in favor of their creator.

Misuse of Social Bots and Fake News for Manipulation

The situation becomes critical when companies, politicians, parties, or the state itself misuse social bots in order to distort public opinion. With fake friends or followers, it is easy to make yourself, your agenda, or your product appear popular and a competitors account less interesting and popular.

Bots can be conveniently used for promotion, by making the bots constantly like, share or mention trending keywords and hashtags. Thus, an army of social bots can easily influence the trending topics on social media, which can be the basis for political and economic decisions. Extremist positions might be encouraged or more supported than in reality.

Of course, it is unlikely that moderate people all of a sudden abandon their political opinion. However, many people tend to follow the crowd. Especially those who are susceptible to manipulation might just believe that the majority of users share the views spread through extremist content and fake news on Facebook, Twitter & Co. As social bots are especially active in controversial political discussions, they might as well be capable of manipulating public opinion in a democracy.

In the second part of our article, we take a closer look at bot activities during the US election campaign, Brexit, the Ukrainian conflict, the coronavirus, and refugee crisis and show you which tools can be used to identify social bots.